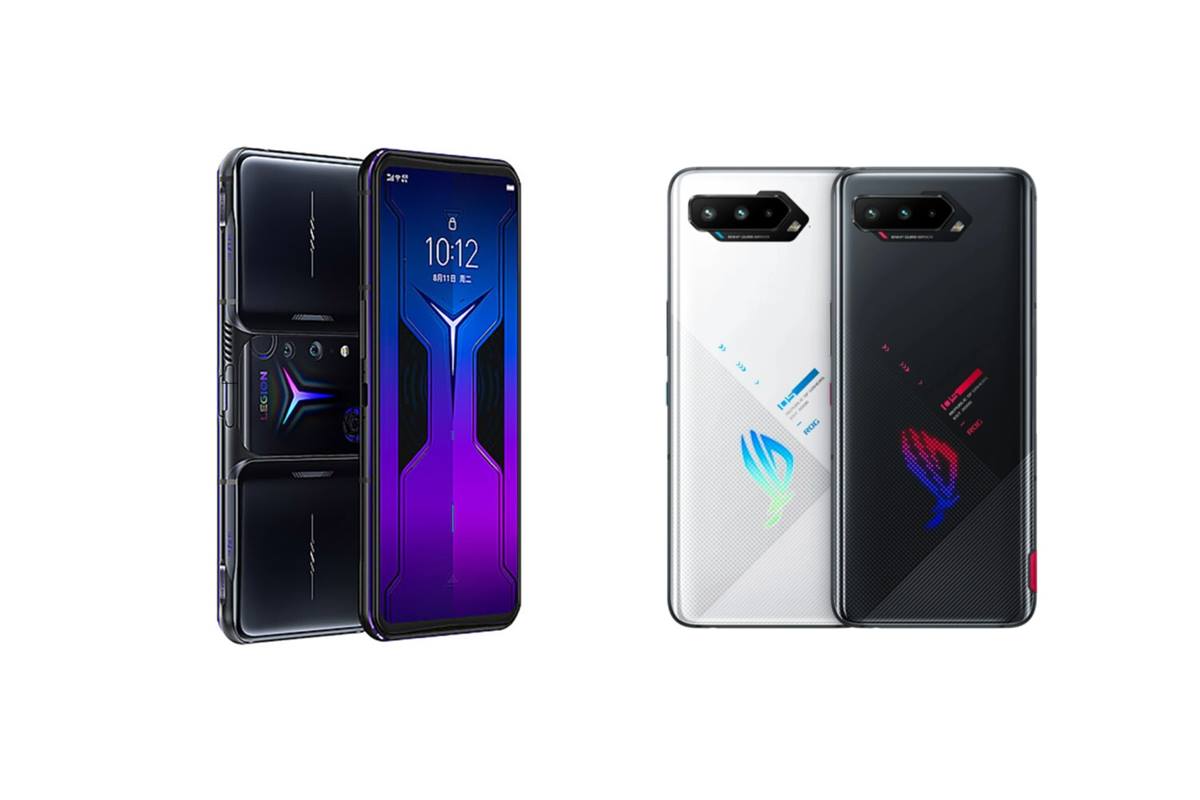 Smartphones have evolved way too much in the past few years. Five years back, smartphones were limited to more RAM, big screen sizes, and better cameras. Fast forward to 2021 and we have exceeded the boundaries with innovation in different aspects other than the basics. One of the most interesting things that happened to the industry was the Gaming era of smartphones.

With that said, let’s meet two of the current monsters in the industry that strobe aggressive specs and go beyond the boundaries offering crazy internals and a choice to the Millenials. We are talking about none other than the Lenovo Legion Duel 2 and the Asus ROG Phone 5.

Well, pretty big names, and why not, the specs speak out for them as they are infused with similar internals offering a full-fledged gaming experience, and the phones also come at a similar price range. For smartphone gamers, the ROG Phone 5 and Legion Duel 2 are the best devices if not perfect. With two good phones in the room, it is daunting to choose the one that suits your needs. Well, let’s find out, the major differences between the two and compare them side by side.

The Lenovo Legion Duel 2 has one of the most unique designs in a gaming phone. It is built out of metal and glass with a glossy glass body at the back and metal on the sides. The phone has the rear camera hump in the center denoting that it is meant for landscape usage. On the other hand, the ROG Phone 5 brings in the fancy-looking gaming design in the standard portrait shell. It is also a mixture of glass and metal with crazy graphics at the back.

In terms of RGB, the ROG Phone 5 has the ROG logo lighted up with customizable light effects. The Legion Duel 2 has the ‘Y’ in the center that lights up and can be customized in the settings panel.

The Lenovo Duel 2 has a mammoth 6.92-inch AMOLED display with a whopping 144Hz refresh rate and 720Hz touch sampling rate. The ROG Phone 5 flaunts its slightly smaller 6.78-inch AMOLED display with the same 144Hz refresh rate and 300Hz touch sampling rate. Apart from the size, the phones have almost similar display specs such as HDR10+ support, FHD+ resolution, and the screen-to-body ratio also matches at 82%. In terms of protection, the Legion Duel 2 has Gorilla Glass 5 and the ROG Phone 5 has the Gorilla Glass Victus protection. The former has 1300 nits of peak brightness as compared to the 1200 nits of peak brightness on the latter.

Unquesnabilly, the phones power the most powerful Qualcomm processor, the Snapdragon 888 5G. The octa-core chipset is based on 5nm and has Adreno 660 GPU onboard. Interestingly, the phones went overkill in terms of RAM and storage. The smartphones come with 18GB of RAM and 512GB of UFS 3.1 internal storage. There’s no expansion slot on both devices.

In terms of batteries, the ROG Phone 5 goes ahead with its chunky 6,000mAh cell as compared to the slightly smaller 5,500mAh cell on the Legion Duel 2. However, in fast charging, the Legion Duel 2 takes the lead with its 90W dual-charging support. For starters, the phone literally has two USB Type-C ports which can be plugged simultaneously for 100% of the juice in just 30 minutes. The ROG Phone 5 has a 65W fast charging speed that will take 52 minutes to go from 0% to 100%.

Both the smartphones run on Android 11 out of the box with ROG UI on ROG Phone 5 and ZUI on the Legion Duel 2. The software truly differs for everyone and same is the case here. Both the custom skins have gaming theme to it but there’s an option on both to use a lighter skin on top of that custom UI.

Aside from the standard internals, the Lenovo Legion Duel 2 and ROG Phone 5 boast a Liquid cooling Vapour chamber for maintaining the heat while playing heavy games. The Legion Duel 2 has 6 pressure-sensitive buttons that act as gaming triggers and 4 ultrasonic buttons at the top. The ROG Phone 5 also has similar trigger buttons but misses the onscreen push buttons.

In terms of fans, the Legion is on top with its in-built fan at the back which Asus has tossed as an accessory for the phone. Not necessary that an in-built fan is better as it adds more bulk to the device and adds to its thickness. The fan on the ROG being a separate accessory aids for the bulk and makes the phone lightweight and thinner. It’s pretty much a personal choice at the moment.

If you are an aggressive gamer then the ROG Phone 5 might impress you, thanks to its accessory compatibility. With the ROG Phone, you can get multiple accessories such as Kunai Gamepad, ROG Clip, Aero Active Cooler, and much more. With Legion Duel 2, you are limited with what you get.

The camera is the last thing one notices on a gaming smartphone. Yet, it is one of the most important things in a smartphone. The Legion gets a dual rear camera setup with a 64-megapixel primary lens and a 16-megapixel wide-angle lens with a 123-degree field of view. On the other hand, the ROG Phone features a triple rear camera system with a 64-megapixel main, a 13-megapixel wide-angle lens(125-degree field of view), and a 5-megapixel macro lens.

On paper, the ROG Phone 5 shines at it has an extra macro lens and a slightly wider FOV ultra-wide lens. Do note that the Duel 2 has a sharper 16-megapixel ultra-wide lens. In terms of the front cameras, the ROG has a 24MP unit, and the Legion has a 44MP motorized pop-out selfie camera.

For the asking price of EUR 799, the Lenovo Legion Duel 2 offers a better display, more game-centric features, and fast charging support. Pay EUR 100 more, i.e. for EUR 899, you get better cameras, a bigger battery, a headphone jack, and accessory compatibility.