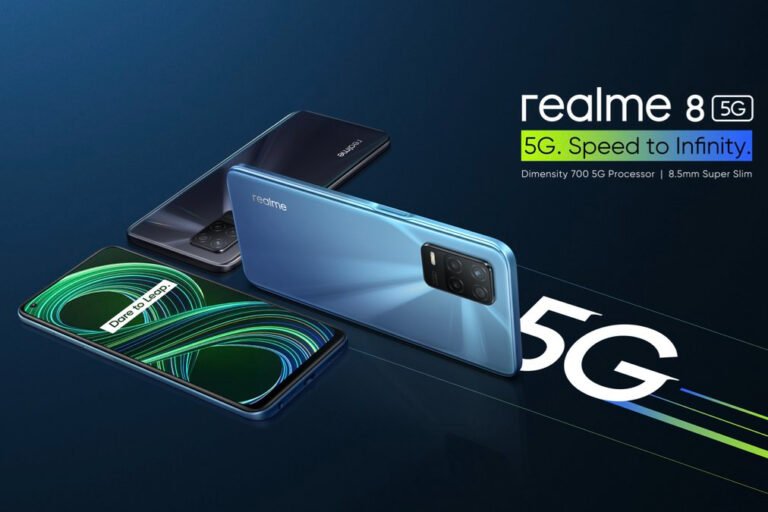 Chinese smartphone giant Realme has officially taken covers off the Realme 8 5G smartphone in the Indian market. The smartphone will cater to the budget segment of buyers who are anticipated for 5G-ready handsets. For those who are unaware, the smartphone has already debuted in Thailand earlier. With its Indian launch, the market for the device has grown.

While we know that the smartphone has already made it to the Thailand market, many few Realme fans are aware that it is actually a rebranded version of the Realme V13 5G. Anyways, it’s a 5G handset, and a true 5G device in the Indian market is a big leap for Realme.

Without a further ado, let’s get straight to the specifications of the smartphone.

The Realme 8 5G is handset comes in a taller built sporting a 6.5-inch LCD display panel. It is a punch-hole screen with a resolution of Full-HD+(1080 x 2400 pixels). The screen has a high 90Hz refresh rate and a pixel density of 405 PPI. The panel is bright enough with 600 nits of peak brightness and the screen is visually appealing, thanks to the 90.5% screen-to-body ratio.

It has a standard design, nothing fancy to catch a cataract. Said, that it has a triple rear camera system with a 48-megapixel primary lens, a 2-megapixel macro sensor, another 2-megapixel monochrome unit. Upfront, it has got a 16-megapixel selfie snapper. The camera can shoot 4k videos and has different effects including the portrait effect for pictures.

Fueling the system is the MediaTek Dimensity 700 chipset paired with 4GB or 8GB of LPDDR4x RAM and 128GB of UFS 2.1 native storage. We are not pretty sure if Realme has provided an expansion slot but we will get it confirmed soon. Moving forward, the smartphone packs a 5,000mAh battery with support for 18W fast charging. Interestingly, the company provides the fast charger inside the box of the phone.

The battery can be juiced up by the USB Type-C port at the bottom and for security, there’s the side-facing fingerprint scanner. It is a power button that doubles up a fingerprint scanner. The device also has a 3.5mm headphone jack for audio and supports dual-band Wi-Fi, Bluetooth v5.1, and dual-SIM. Sadly, the handset misses out on NFC as compared to the variant launched in Thailand.

The smartphone can be picked up in two color options – Supersonic Black and Supersonic Blue. The first sale is scheduled on Flipkart for April 28 at 12 PM IST.

In related news, Realme has also launched the Realme 8 4G in Thailand for a much more affordable price of ~$287. The major difference is in the display, where the 4G variant gets an AMOLED panel, the chipset – MediaTek Helio G95, and the cameras – 64MP Quadruple system.