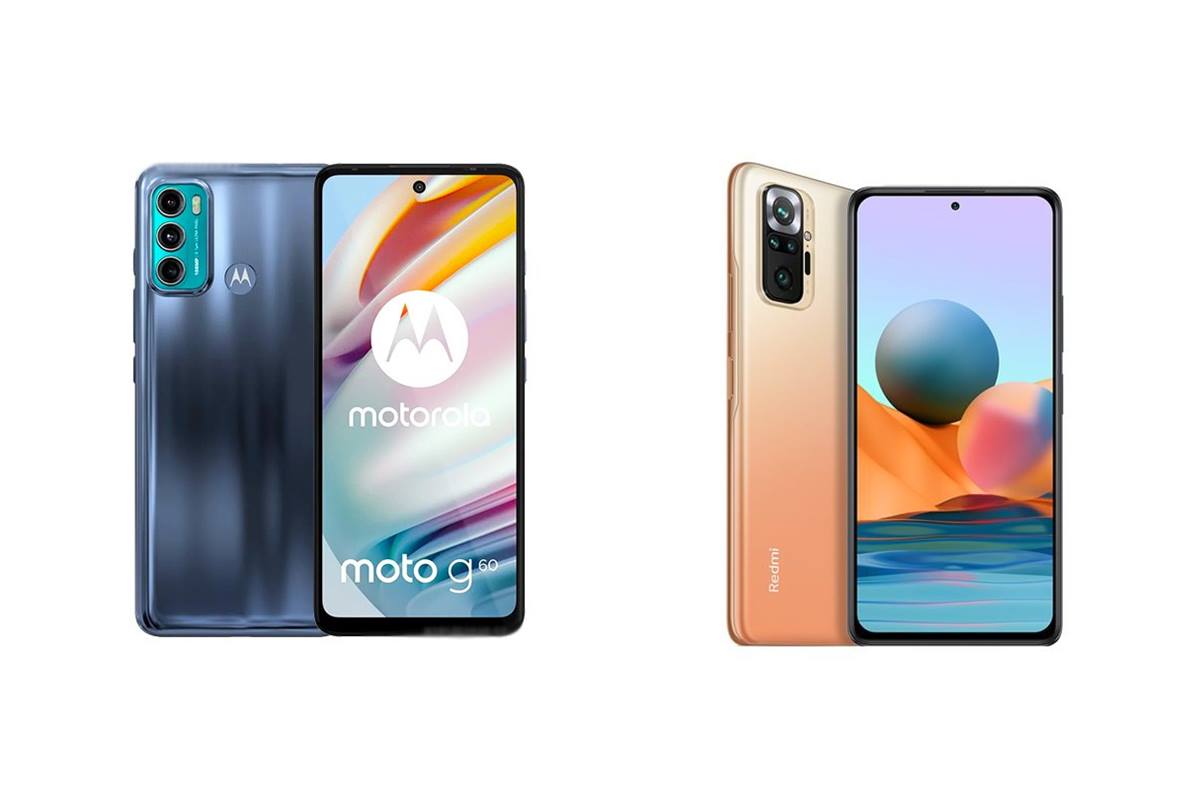 Xiaomi’s Redmi unveiled the Redmi Note 10 series earlier this year with aggressive specs on board. The higher-end model in the series dubbed the Redmi Note 10 Pro Max has flabbergasted the fans with its specs to performance ratio. While the handset was a popular choice so far, its fame does not seem to last for quite long, thanks to the new budget contender in the segment – the Motorola Moto G60. As simple as its name, the device has been tossed recognizing the competition in the market, while keeping the internals straightforward. The handset comes with similar specs as the Xiaomi Redmi Note 10 Pro Max surpassing in some aspects while being short in a few. In this piece, we will be comparing these two popular choices(Motorola Moto G60 vs Redmi Note 10 Pro Max) and listing down the major differences between the two.

Keeping things simple, let’s get to the design and build of the smartphones, followed by the display, cameras, and internals.

The Motorola Moto G60 carries a pretty straightforward design with its shiny polycarbonate plastic built at the rear and a glass panel at the front. It has a vertical camera module at the rear and the camera island has a different color from its back making the overall design having a contrasty look. On the other hand, the Redmi Note 10 Pro Max has premium glass built with a unique rear camera island. Similar to the G60, the Note 10 Pro Max also has a silver border over its camera island.

The G60 has a larger 6.8-inch display as compared to the slightly smaller 6.67-inch panel of the Note 10 Pro Max. Both the displays are punch-hole screens with Full-HD+ resolution and 120Hz refresh rate. Two of them also boast HDR10+ support with a bright screen.

One major difference worth noting is the type of display. The Moto G60 has an IPS LCD panel, whereas, the Note 10 Pro Max has a Super AMOLED panel. No doubt, the lead is in the hands of Redmi.

Cameras on the Moto G60 and Redmi Note 10 Pro Max

In terms of cameras, smartphones offer ultimate value, thanks to the big 108MP primary sensor. The Note 10 Pro Max has a Quadruple camera system, whereas, the G60 flaunts its triple rear setup. Even though three sensors, the G60 has a complete package led by a 108MP primary lens, an 8MP ultra-wide-angle lens, and a 2MP depth sensor. The Note 10 Pro Max’s setup goes by a 108MP primary lens, ab 8MP ultra-wide-angle unit, a 5MP macro, and a 2MP depth sensor. The additional macro sensor can be quite handy for photography enthusiasts but other than this, on paper, there’s no real difference between the two.

In terms of video, both smartphones can shoot 4K videos at up to 30fps and 1080p videos at up to 120fps. There’s HDR support on both phones. Moving to the front cameras, the G60 takes the lead as it has a 32MP selfie camera as compared to the 16MP selfie shoot on the Note 10 Pro Max.

The major reason behind this comparison has to be the internals. As both the phones fuel the same Qualcomm Snapdragon 732G chip, there’s confusion about their actual performances. For those who are unaware, the Snapdragon 732G is a 4G enabled SoC based on an 8nm process having Adreno 618 GPU.

The chipset is quite popular in this segment and offers a ton of value but the main question is which one excels in real-world usage. On paper, there’s no difference but when paired with the UI, things come into consideration. No doubt, here the stock Android UI(Android 11) on the Moto G60 takes the lead as it has almost no bloatware or any third-party apps to hinder its day-to-day performance. Although the MIUI 12 on the Note 10 Pro Max is feature-rich, the day-to-day performance on stock Android is always preferred.

The Moto G60 has a rear-mounted fingerprint scanner, whereas, the Note 10 Pro Max features a side-mounted fingerprint sensor. It seems like the use of space on the Redmi is better, however, some people prefer a large sensor to the sleek side-facing units, therefore, it totally depends on person-to-person.

The Note 10 Pro Max has IP53 water and dust resistance rating as compared to Motorola’s water-repellent coating. Both the phones have a 3.5mm headphone jack for audio and a USB Type-C port for charging and data transfer. Interestingly, the G60 has NFC, which the Pro Max lacks, however, the Pro Max has an IR Blaster, which the G60 misses out on.

Considering the overall specs, if a user wants a better display, fast charging support, a good speaker setup, and a premium design, then the Note 10 Pro Max is what you need to look for. For those who are looking for a larger and chunker phone with better cameras, better battery life, and an ad-free/smooth user interface, then you should go with the Moto G60.