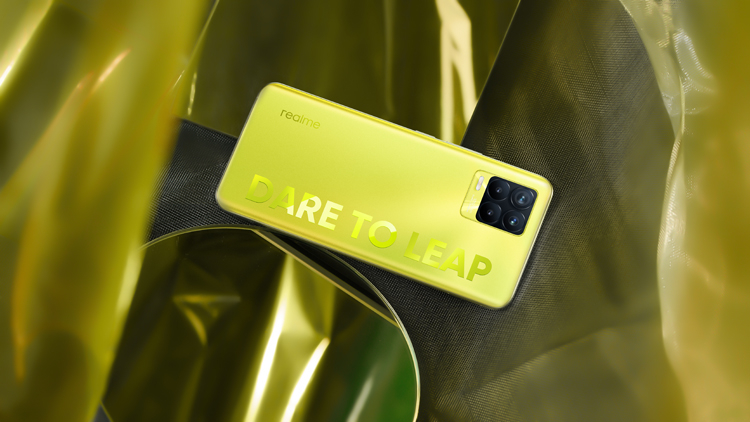 Earlier this year, Realme unveiled its Realme 8 series in the Indian market, and the higher-end model in the series, the Realme 8 Pro received a fresh color last week. The color variant named Illuminating Yellow has just gone on its first-ever sale in the Indian region. The Realme 8 Illuminating Yellow brings freshness to the 8 Pro’s color palette and its ability to illuminate in the dark gives it an edge our the competition.

The new color has the same internals as the regular Realme 8 Pro smartphone. The major highlight of the smartphone has to be the Super AMOLED panel in the price range of under ₹17,999(~$241). The aforementioned price is for the base 6GB + 128GB variant and the maxed out 8GB + 128GB variant will cost you ₹18,999(~$255). Apart from the new Illuminating Yellow, the phone is available in Cyber Silver and Cyber Black color variants.

The Realme 8 Pro comes in a matte finish with a yellow-colored camera module and the “Dare to Leap” branding. The camera island’s edged and the tagline glows in the dark giving the device an edge in the market. The smartphone sports a 6.4-inch Super AMOLED display with a Full-HD+ resolution and standard 60HZ refresh rate. It is a punch-hole panel with a 20:9 modern aspect ratio.

It is built out of glasstic materials meaning that it has a glass front panel and a polycarbonate plastic built at the back.

As for optics, the phone has a quad-rear camera setup and the highlighting feature is the 108-megapixel primary lens. With competitors launching phones with 108MP primary sensors, Realme has also caught the light. The other lenses accompanying the primary are an 8-megapixel ultra-wide-angle lens, a 2MP macro sensor, and lastly a 2MP depth unit. At the front, the smartphone has a 16-megapixel single selfie camera.

The device also has a dual-tone LED flash besides the camera lenses for capturing images in dark situations. The rear camera can record 4K videos at up to 30fps and slow-motion videos at up to 960fps. The camera also supports High Dynamic Range for brighter and better pictures.

Under the hood, the smartphone comes powered by the Qualcomm Snapdragon 720G SoC paired with up to 8GB of RAM and 128GB of UFS 2.1 internal storage. Realme has provided a dedicated microSD card slot for storage expansion up to 1TB. About the chipset, the Snapdragon 720G is a 4G-enabled octa-core SoC based on an 8nm process having Adreno 618 GPU.

It packs a 4,500mAh battery with support for 50W fast charging support. The company claims that the device can go from 0% to 100% in 47 minutes. For security, the phone has an in-display fingerprint scanner and support for face unlock.

The smartphone has a dual-SIM slot with support for 4G VoLTE on both SIMs. It has Bluetooth v5.0, Wi-Fi, 802.11, GPS, and GLONASS support. The device runs on Realme UI on top of Android 11. It has a 3.5mm headphone jack and USB Type-C port for data transfer and charging. It is fairly thin coming at 8.1mm. The device is quite light as well at 176 grams.