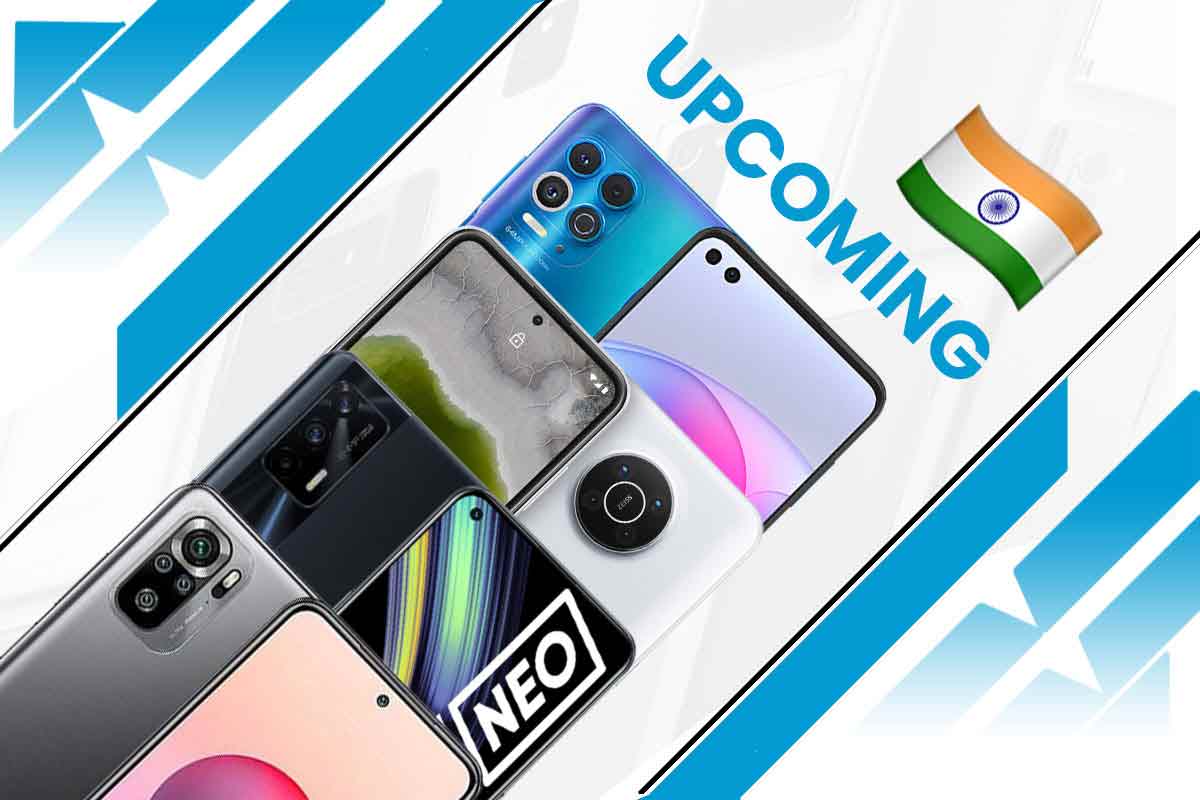 Round-the-clock there have been smartphone launches across the world. Amid these launches, we shouldn’t forget the Covid-19 situation, especially in the Indian region. While the scenario is yet to be curtailed, the tech industry is getting filled with new phones. Some smartphone manufacturers have prorogued these launches there are still quite a few tech giants who have scheduled a whole series of devices to land in the Indian region. As there are these many launches, it’s getting hard to keep a track of each launch which makes us present this piece where we will list all the upcoming phone launches in May and June in the Indian market.

The last month has been quite hectic in terms of phone launches, we got to see flagships from iQOO, Xiaomi, budget, and mid-range phones from Samsung, Vivo, Oppo, and many other entry-level devices were tossed. For this month we have a long list of 10 smartphones starting from Asus to Xiaomi. We expect the following list of upcoming phone launches in May and June will suffice the allured geek inside every other smartphone consumer. So without further ado, let’s get started.

Upcoming Phone Launches in May and June in India

The list is long and we have itemized it in ascending order meaning the 1st device doesn’t rank itself and nor does the last phone proves its position.

One of the certifications to prove its presence in India has to be BIS Certification. The handset has recently made it to the Bureau of Indian Standards hinting at a launch in the next couple of weeks. So far, we haven’t received any official wordings but we can still expect it to arrive in May or April.

Snapdragon 888, a compact 5.92-inch form factor, a great camera setup is all you can expect from the series. Additionally, Asus this year is said to eliminate the flip cameras seen in the predecessor. Instead, it might go with standard sensors. It also means that no full-screen panel, rather, leaks hint at a punch-hole display on the Zenfone phones.

Earlier, Motorola unveiled the G100 flagship smartphone in the global market at a mid-range. Now, it is expected to land in the Indian region for similar pricing. Some of its specs are as follows. A 6.7-inch IPS LCD display with a Full-HD+ resolution and 90Hz refresh rate.

It has a triple rear camera setup with a 64MP primary lens, a 16MP ultra-wide-angle camera, and a 2MP depth sensor. The smartphone fuels the popular flagship choice, the Qualcomm Snapdragon 870 SoC. It is a newly launched SoC based on a 7nm process having Adreno 650 GPU. Just like other G-series siblings, the G100 also houses a 5,000mAh battery.

If the phone arrives in India, we expect it to compete against the likes of iQOO, Realme, and Xiaomi.

A few months back, Micromax launched an entry-level phone in the Indian market. The smartphone dubbed Micromax In 1 has a large 6.67-inch FHD+ display panel with 440 nits of brightness. The device competed with budget phones from Realme and Redmi.

Now, as we have moved towards the Q2 of 2021, the company is expected to bring a successor to the market and it could be called the Micromax In 1 Pro. It will have improved internals and possibly a better camera setup.

As of now, there’s no word from the company but we can expect it to arrive by May or April(expected).

We all get super-excited for almost every device coming from the popular smartphone maker Nokia. The HMD Global-owned firm is now expected to launch the Nokia X10 5G and Nokia X20 5G in the market. To remind you, these phones made their official debut last month powering the Qualcomm Snapdragon 480 5G SoC.

Yes, Nokia is coming with 5G phones leaving no space for its competitors. Although the specs are quite basic, the company is providing 3 years of warranty on these phones. When the phones launch in India, we expect Nokia to provide the same service in the Indian region.

We don’t affirm but leaks hint at a launch of a budget series iQOO phone in the Indian market. It could be called the iQOO Z3 and it is expected to land in the Indian market next month. It is the same iQOO Z3 5G that launched last month in the Chinese market for under ₹20,000 range. When it arrives in India, we can expect it to come at a similar price range.

The Qualcomm Snapdragon 768G inside the phone paired with 55W fast charging would be the marketing features of the phone in the region. It boasts a 120Hz panel, a 64MP quad-camera setup, and a side-facing fingerprint scanner. The highlighting fast charging technology will be support by the 4,400mAh cell present inside the device.

Last year OnePlus created a buzz in the market with its first-ever Nord-series phone. The OnePlus Nord the company’s first budget phone and the saga seem to continue. Rumors are rife that OnePlus will launch its second iteration in India soon and it could be called the OnePlus Nord 2.

It is suggested to take it with a pinch of salt but the Nord 2 could also accompany the Nord 100 or N10 which launched last year exclusively in the global market. As rumors are in the mid-way, we don’t have the exact specs of these upcoming phones but we can expect OnePlus to impart the latest Dimensity or Snapdragon chipsets to power the phones.

Oppo just took wraps off the Oppo K9 5G in China and it is said to arrive in India soon. The phone might get rebadged or rebranded but it is expected to arrive with the same design, internals, and most importantly the 5G support.

Snapdragon 768G powered K9 5G is a mid-range phone launched at around ~$309(converted Chinese pricing) that offers a fast 65W fast charging, 90Hz refresh rate display, and liquid-cooling support. When it lands in India, expect it to be priced similarly to the Chinese pricing.

Poco is expected to refresh the already available Poco M3 with a Pro variant and surprisingly, it will be a 5G capable handset. The Poco M3 Pro was seen on BIS certification affirming that launch is in the pipeline for the Indian market. Some of its specs would be an IPS LCD display with a 90hz high refresh rate, 48MP primary camera, and the mid-range MediaTek Dimensity 700 SoC.

While the Poco M3 Pro 5G is touted to launch this month, the flagship Poco F3 GT will debut later in the region. There aren’t any official wordings but it is tipped to land in India by April this year. For those who are living under the rock, the F3 GT will be a rebranded Redmi K40 Game Enhanced Edition that recently launched in the Indian region.

The Poco F3 GT could be the much-awaited F-series phone for the Indian market with specs like a Dimensity 1200 flagship SoC, a 120Hz refresh rate display, and 64MP triple rear cameras. The phone will come with liquid cooling technology and a whopping 67W fast charging support. In China, it launched starting at CNY 1,999(~₹23,000) for the base variant and we expect the device to be priced similarly in the India region.

To compete with the upcoming Poco F3 GT and the existing Mi 11X, Realme is expected to launch the Realme X7 Max 5G in the Indian market. It will be nothing but a rebranded Realme GT Neo at affordable pricing.

We can expect the Realme X7 Max to come powered by a large AMOLED display, the latest Snapdragon 870 SoC, and 50W fast charging support. The phone carried a price tag of ~$310 in the Chinese region so we can expect the phone to launch under ₹25,000 in the country.

Apart from the flagship, Realme is also expected to launch a budget 5G phone. The Realme 8 Pro 5G was seen on multiple certifications with Snapdragon 750G SoC. Currently, we have two phones in the Indian market with the same chipset. Both phones come at around ₹20,000 price range, we expect the Realme 8 Pro 5G to launch under the set cap offering a value for money 5G phone.

As of now, we don’t have much information regarding the same but as we move ahead, we can expect a teaser in the coming weeks. In addition, a 4G phone dubbed Redmi Note 10S is also set for launch on May 13 in the Indian market. The 10S will be a MediaTek Helio G95 powered phone with a standard 60Hz refresh rate and an AMOLED panel.

Our list of upcoming phone launches for this and next month includes all scheduled, rumored, and tipped smartphones. So out of these, which smartphone are you most excited about? Do let us know in the comment section.